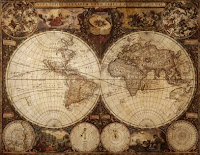 Maps can be more than a visual representation of continents, roads, rivers and cities.  They can tell us a story, inform us about history, how we view our place in the world.  The ten maps shown in the British Mail’s article "Ten of the Greatest:  Maps that Changed the World" make that clear.  Maps tell stories and here are ten of the most noteworthy.   (http://bit.ly/bxo0dy)  The oldest one was created in  1400 and the most recent?  It's the 2005 Google earth.

You’ll be fascinated by the 1490 map that Columbus used to help convince the King Ferdinand and Queen Isabella to fund his historic voyage and the one created in 1623 for the Chinese Emperor.  It shows China at the center of the world, even larger than it is in reality.

There's one on the list that I know well, many of you will also.  It's the 1933 map of the London underground.  Why did it make the list?

“ Harry Beck's Underground map solved the problem of how to represent clearly and elegantly a dense, complex interweaving of train lines.  Placing the stations at similar intervals regardless of their true locations amplifies the area of central London, increasing its clarity, while the straight lines and interchange symbols confer a simplicity and order on the network. A cartographic icon.”

How many subway maps have you used that follow his concept?

Read more by clicking on the link or even better, visit the exhibit exhibition at the British Library in London.  It runs through September 19, 2010 (http://www.bl.uk/magnificentmaps/)
Posted by Lanie at 10:00 AM