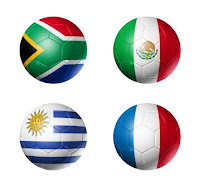 With the World Cup starting in less than three weeks soccer teams were forced to make the final decisions about which 23 players would compete when the games begin.    The choices are complicated and difficult.  Kevin Baxter’s article “Mexico’s roster cut has fallout” in the Los Angeles Times (www.latimes.com) looks at the possible ramifications of that team’s choices.  At the last day allowed they cut  talented young player named Jonathan dos Santos bringing their number to the required 23.

I have no idea if this was a good move or not.  But what struck me was a comment by one of the team who stayed on the roster.  In describing his reaction to the decision he said, “whenever a teammate leaves, a teammate with whom you’ve spent time, eaten with, practiced with, it’s difficult.”

His words reminded me again of the power of a shared meal.  Whether it’s at a training table, an elaborate awards banquet or  coffee and snack at Starbucks meals eaten with others are special. They allow us time to connect , to have conversations that might not occur in any other situation.

Next time you’re debating whether to attend that dull sounding dinner consider the potential benefits.   Recall the comment of the soccer player ranking the shared meal with the experience of practice and being together.  If meals matter in building the bonds within a soccer team then its likely they can make a difference in the links in our lives - for pleasure and for business.
Posted by Lanie at 11:00 AM

I love browsing your blog for the reason that you can always bring us fresh and cool things, I feel that I ought to at least say thanks for your hard work.