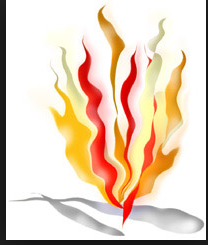 The games have started.  The Sochi 2014 Olympics officially began with the opening ceremonies televised around the world.  Impressive and dramatic.

For the athletes the games began years ago as they practiced and competed for spots on their teams.

But there was another beginning – the lighting of the Olympic torch,  the symbol of the continuation of the Olympic spirit, the shared excitement of the world’s athletes coming together.  Starting more than four months before the opening ceremonies, this torch had a unique journey.   It was carried by  14,000 torchbearers (one 101 years old) as it visited 130 Russian cities and towns.  It was carried up a mountain, down to the bottom of the largest fresh water lake in the world and even made it way up into space – an idea impossible to imagine when the torch relay began almost eighty years ago.

Let us hope that the spirit of the relay, the commitment and cooperation of many people working together to reach a shared goal can inspire us all.  It shows once again that together we can turn amazing ideas into equally amazing accomplishments.
Posted by Lanie at 3:30 PM