Global Cities from around the world 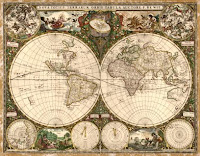 How does your city rank as a Global City?  To find the answer  review The Global Cities Index 2010.  The list is a collaboration of the Foreign Policy magazine, A.T. Kearney and the Chicago Council of Global Affairs. (http://www.foreignpolicy.com/node/373401)

Not simply a list based on population but rather an analysis of 65 cities with populations of over a million ranked using “25 metrics across five dimensions”. (http://www.foreignpolicy.com/articles/2010/08/18/global_cities_index_methodology).  The metrics include, as you’d expect, the measure of business activity,  human capital, and how freely  information flows into and out of the city.  Beyond these basics they considered cultural experience  (sporting events and diversity of restaurants) and political engagement such as international organizations based there and the perceived influence the city on our global dialogue.

Look to see where your favorite city ranks overall and then explore where it is on the dimensions that you consider most important.   What make a city global for you?
Posted by Lanie at 3:45 PM