Over 100 million people asking: Who will win? 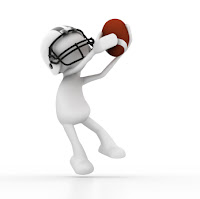 Some might call this the World Cup finals of the US Football (not soccer) season.  Sunday, February 5, 2012 the New York Giants and New England Patriots meet for the right to declare themselves the best football team in the nation (and the world).  It is Super Bowl XLVI, the latest in a series of championship games that began in 1967.

Adding to the interest in this year’s game is the fact that it is a repeat of 2008 when the Giants won a unexpected victory over the then undefeated Patriots.  Will history repeat itself is just one of the frequently asked questions surrounding the game.  Other questions?   What will be the final score?  Which ad will be the best?  How many pizzas, how much beer,  will be consumed while the teams play?

The actual game is only one part of the story.  Gatherings of friends to watch the event are almost as popular as holiday parties.  On Saturday February 3 The Wall St. Journal published articles to help their readers navigate the afternoon.  Check out the  “The 21 Rules of Surviving a Super Bowl Party” and “A Game Guide for Three Types of Fans:  Novice, Casual, Expert.”  (www.wsj.com)

During the last two weeks predictions, team interviews, statistics and analysis have almost overtaken the news of the Republican primaries.  Newt and Mitt (Gingrich and Romney) vie with Eli and Tom (Manning and Brady team quarterbacks of the Giants and Patriots respectively) for most mentions in print, on air, on line.

But it isn’t just the US population that’s paying attention to the event.  The London paper The Guardian  (http://www.guardian.co.uk/sport/2012/feb/04/super-bowl-eli-manning-tom-brady?newsfeed=true) predicts that this game will have the highest TV viewing ever  breaking last year’s record of over 111 million viewers in the US alone.  Given that the game is broadcast to over 200 countries its estimated another 2 million viewers will watch.  While this doesn't even come close to matching the 700 million people who watched the 2010 World Cup finals, it still an impressive nmber.

So now we have another question.  Will total viewers really reach 113 million, over one-third of the US population, or will it go higher?  How Super will this year's Super Bowl become?
Posted by Lanie at 10:15 AM

Email ThisBlogThis!Share to TwitterShare to FacebookShare to Pinterest
Labels: global sports, us football