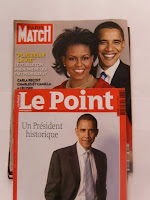 Paris in mid-November was filled with images of our US President elect. Every kiosk seemed to overflow with magazines that had cover photos of Obama individually and others including his family.

The election was a topic of conversation everyone I saw including fashion designer Anne Willi (www.annewilli.com) when I stopped by her store. Was I happy, she asked. A friend and fashion historians wanted discuss the implications of the election and stated how pleased he was with the results. The staff at my hotel congratulated me as if his election was my success.

Neither the full magazine racks nor the conversations with friends were unexpected. What did surprise me was how our US election had made its way to the awareness of so many people. The
moment that made it clear to me was at the beginning of a tour of Chateau de Breteuil (www.breteuil.fr) when the owner welcomed us and in pointing out the young woman who could
help us with a special program, introduced her as “Obama’s younger sister”. (And there was a resemblance). There was much laughter, smiles all around at the little joke. But for me, it was a moment to realize how many people, in so many places were touched by our election, who feel in some way that this incoming president represents hope and possibility not only for the US but for the world, for their world. We hope it’s true.
Posted by Lanie at 9:27 PM

Hi Lanie, a lot of people outside USA was touched by your elections, as we do believe that States as a leading country should come back to the values and ideals which were almost killed... This is absolutely true!

Stopping over via Philip's blog. What a wonderful post! Thanks for sharing. I really noticed how impressed the French were with the election resultsp- a joy felt worldwide.... It refreshing to read this post after I just received a personal attack and insults by a total stranger-- someone who commented on my California blog... someone who voted McCain/Palin and is not happy with the results of the elections... I think he's in the minority... Happy New Year to you...
Namaste,
Leesa